‘Become a better striker in soccer’ sounds like the most meaningless type of advice a coach could ever give a player.

It is so vague and has no real meaning behind it. What does it mean to become a better striker in soccer?

What makes a striker good in soccer? Do we count only goals scored? Or is there something more, a bigger picture of sorts to be considered?

Right off the bat we can say that there is more that just goals and scoring if you’re looking to become a better striker in soccer.

In order for us to answer how a player can become a better striker in soccer, we need to look through these things in detail and find out the best alternatives that should be pursued.

Strikers have always been a staple of the soccer world, and every nation, or club has one of their legends as a great striker.

There is only one thing that we must touch upon before we embark on our journey to help you become a better striker in soccer.

We first need to point out the difference between a striker and a forward. Striker is the position of the center forward, the most advanced player of the team, the number 9 if you will.

Meanwhile ‘forward’ is a term used to describe many different positions within the attacking part of the squad. Every striker is a forward but not all forwards are strikers.

With that out of the way, let us get down to the specific of how to become a better striker in soccer, focusing on 3 main things. 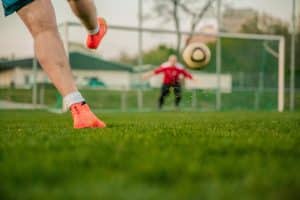 If you have ever faced issues with finish, and scoring, you know how hard and traumatizing it can be to improve this part of the beautiful game.

Scoring goals is something that if you watch on TV, you can swear it’s easy. If you see it on the pitch, you can also swear that it is almost second nature for some players to score goals.

There is of course a brush of talent involved in scoring goals, but if your goal is to become a better striker in soccer, and you don’t have this talent; don’t panic!

Scoring goals is something that everyone can learn. You need the right mindset and the right training.

Speaking of the mindset, you need a level of confidence and self-belief to score goals. As someone who’s favorite cup of self persecution are insecurities, I have always hated this fact!

My work around this always was working twice as hard on three main things: target practice, general shooting skills and ball control.

Being able to control the ball perfectly with one touch or two, then being able to immediately firea shot that sends the ball at the perfect target, will give you the confidence you need to believe in yourself come match day.

Make sure that you continuously practice these three skills, as they will always be very useful and necessary during matches. 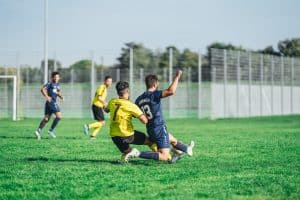 In trying to become a better striker in soccer, you will learn that when it comes to scoring goals, the entire team aims to create as many chances for the main striker as possible.

This is the nature of soccer, where the center striker is the player who generally is the closest to the enemy’s goal at all times.

By adding a bit more aggression to your game, you can make sure to maximize the number of chances you get, while also positively impacting the outcome of the chances you get.

An imperfect cross, a pass that is a bit too wide, a missed shot from a teammate, a mistake in the defence, all of these can be chances if you can capitalize them.

A perfect chance, pretty much doesn’t exist. You will always have a bit of a probability to miss the shot, to be stopped on your tracks, so on and so forth.

Pay attention to the fact that aggression in soccer doesn’t mean simply being more aggressive and getting into more duels for the ball.

If you want to become a better striker in soccer, you need to be more aggressive in that you will need to run more and do your absolute best to never let any ball go to waste.

The aim should never be to hurt or injure your enemy in any way, but at the end of the day if you commit a foul in your enemies penalty box it will be a free kick for the goalkeeper.

Yet if they foul you, it’s a penalty! In getting yourself in more altercations with the opposing defenders you increase the likelihood of your team receiving a penalty.

All this to say that aggression is an essential part of the formula that leads to you learning how to become a better striker in soccer. 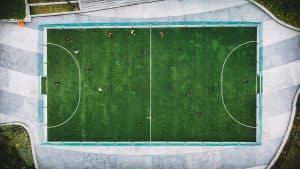 Off-ball movement is the most underrated aspect in the entirety of soccer. The only thing that comes close to it is defending. But even there the margins are huge!

Off-ball movement is vital for strikers in soccer. As we mentioned when discussing aggression, as a striker you should do your best to maximize the amount of chances created by your team.

The off-ball movement of a striker can at times be the make or break factor. The best example of this are the so-called ‘tap-in’ goals.

They are generally somewhat frown upon within the soccer community and especially among fans, but the truth of the matter is that tap-ins take more skill to happen than people realize.

For those unfamiliar; a tap-in is a goal that is scored in front of an empty goal. Most of the time, it comes to fruition thanks to a pass and the scorer is found one on one with only the goal.

To be in that position however, takes skill. A great analogy would be a good spy! A good spy enters enemy territory, and without being detected finds a way to be at the perfect place and at the perfect time.

As a player who wants to become a better striker in soccer, tap-ins are your best friend and you should do your best to find yourself in as many positions to score them as possible.

The skills of the off-ball movement within soccer go beyond scoring tap-ins of course, but as a striker that will be one of your main goals.

We believe that a fantastic way to become a better striker in soccer, and to improve your soccer skills in general is to watch footage from pros. For today’s purposes we want to recommend you watch Bayern Munich.

If you want to learn to become a better striker in soccer you can definitely take a page from both Robert Lewandwoski and Thomas Muller.

The latter has one of the best off-ball movements in the whole of soccer, meanwhile Lewandowski is one of the greatest strikers in the history of soccer!