Defending soccer skills are some of the hardest skills to hone and master. The entire game of soccer is on the hands of defenders.

Do not let the low levels of admiration and appreciation that defending usually gets within soccer fool you into thinking that defending soccer skills aren’t absolutely necessary.

We would go as far as to say that there is an absolute need for every soccer player to work on their defending soccer skills.

Imagine the many times where an entire team has had to play defence. Maybe, it is a grand finale, and you are winning 1-0, it is crucial moments like this where defending can save big games.

Also, a quote that we’ve mentioned before is the famous “Attacking wins you games, defending wins you trophies.” Is one of the biggest truths in soccer.

Defending is criminally underrated! Not just because of how important it is, but also because of how beautiful defending can be. So much so that we feel totally comfortable referring to it as an art form.

Think about the masterful tackles, the soul crushing or life bringing slides that stop the football from going in at the last minute, so on and so forth.

If you aim to work on your defending soccer skills you have come to the right place, as we will be sharing 3 basic tips that can help you progress in your endeavors.

As always keep in mind that we will be talking about general defensive skills, and we won’t get too much into the specific techniques or drills.

Improve Your Defending Soccer Skills By Working On Your Mental Game 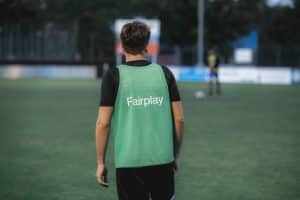 Back in my days of playing professional soccer, I had the opportunity of playing in pretty much every soccer position there is.

My coach, who was a true soccer genius, always used to say that defending is all about mental warfare. I know that it sounds silly at first, but allow me to elaborate.

The key to improving your defending soccer skills is to improve your ability to not let the football pass you in any way, shape or form.

To achieve that, it is crucial that you remain calm and collected at all times. Most of the time, in soccer, dribbling happens whenever you make a move to reach the ball, and end up not being fast enough.

The trick is to never move first! Allow the offense player to make the first move. That way it will be much easier to predict where they are going, and stop them in their tracks.

Defending soccer skills are also very closely related to following the player instead of following the football. Dribbling in essence is making a defender think you’ll move one way and then moving in another direction.

If you can maintain calmness, let the other player make the first move, the odds are heavily stacked in your favor.

By now, you may have played soccer a lot too, and you will most likely be aware of the fact that during matches, sometimes our reflexes get the best of us and we move almost without even intending to.

In being able to control your reflexes and instead firing them whenever you deem them necessary with your brain, you can improve your defending soccer skills to almost pro levels.

Improve Your Defending Soccer Skills By Training Your Tackles 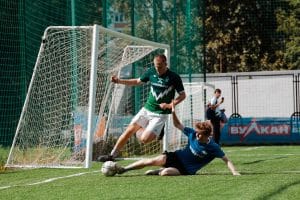 We already talked about tackles, and how fleshy and downright artistic they can be. That doesn’t make them something used only on special occasions.

Quite the opposite, actually tackling is essential for defending in soccer. If you want to improve your defending soccer skills, you need to master the art of tackling.

The difference between a good tackle and a bad one is on whether once you are done you have the football, or you hear the referee whistle for a free kick.

Keep in mind that sometimes free kicks are way worse than just letting the action play. To distinguish between a tackle that ends in a free kick and one that saves your team from conceding a goal, we must look at the rulebook.

Most of the time a tackle won’t be awarded as a foul if the tackle is clean and doesn’t show malicious or violent intent towards the tackled player.

This is mostly because in doing so, you are clearly showing that you aimed for the football and not the legs of your opponent.

On top of that, if you slide the football away, even if the other player ends up falling, it isn’t your fault as they had the opportunity to jump, or move out of the way.

Be prepared for that to never happen though, as most players will simply fall down and screech for a free kick! A good referee though, will be able to see the tackle for what it was.

Tackling is going to be hard to train on your own. So maybe bring a friend along when you try and work this skill out.

Improve Your Defending Soccer Skills By Working On Your General Skills 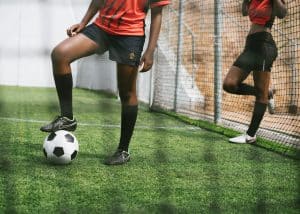 As we were just talking about tackles and how they are an absolute necessity for decent defending soccer skills, one thing that you will definitely need to perform them is speed.

Some of the most memorable and valuable tackles come into the form of a defender chasing down a striker, and then tackling them at the perfect moment to alleviate the danger.

Training your conditioning is also immensely important when trying to improve your defending soccer skills.

More often than not, defenders are the players who have to make the most runs in a game. Especially side defenders such as Marcelo, Philip Lahm, Evra, etc.

The best way to improve all the skills necessary for defending soccer skills is probably doing so through private soccer lessons.

Some of the greatest defenders are known for their aggression and their ability to shoulder strikers back to the youth academy if need be.

To have a perfectly rounded up game is definitely a very hard thing to accomplish. Nonetheless, you need to work towards that goal.

In working towards improving your defending soccer skills, you will by default improve your overall game and soccer skills.

Start training today, and keep in mind that progression is a slow and painful process! But it is also this very process that has some of the greatest rewards one can ever taste!