Women’s soccer is one of the sports that has experienced one of the biggest growth sprouts as of the past few years. This is both in popularity and participation.

As we progress towards a more equal and fair society, women are being given the chance to pursue their passions. In some areas this is happening for the first time ever.

This in turn has led to a lot of women choosing to play soccer and other sports. If you are in the US, you may already know that if there’s one thing ladies can do well, it is kick balls.

Today, we want to take a minute and talk about some interesting facts about women’s soccer. In a way, we are also attempting to celebrate the great achievements that have been made in this regard.

As most people know, it was at one point outright prohibited, or made very hard for women to participate in all sports.

This fortunately is something of the past, and we have progressed to a better, more civilized point… Unfortunately, this isn’t the case everywhere on Earth.

Without further adieu, here are our picks for some of the most interesting, compelling and fascinating facts that we could find about women’s soccer.

The First In Women’s Soccer 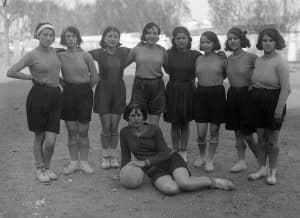 As we already talked about women’s soccer, and women’s sport in general weren’t a thing a relatively short while ago.

In the US, it was around the early 1900’s that we first started to see women given the opportunity to participate in sports, with a competitive nature.

In the year 1950, the US would see the first massive step towards the Women’s soccer that we know today. It was in this year that Craig Club Girls Soccer League would start its first season.

This is by all accounts the first league of soccer for women in the United States. The league consisted of 4 teams and they were based in St. Louis, Missouri.

The rest of the world was doing the same to an extent. So much so that during the 70s and 80s there were plenty of international competitions in the realm of women’s soccer.

All of this would pave the wave for the establishment of the first FIFA Women’s World Cup, which was held only 30 years ago in 1991.

This tournament took place in the People’s Republic of China, and the US Women’s Soccer team won the competition.

Meanwhile on a club level, England would hold the first women’s knockout cup during the 1970-1971 season. This competition saw Southampton Women’s Soccer Club crowned the winner of the Mitre Trophy.

Staying in England, but going back in time; the first women’s soccer club was formed in 1895. Named ‘The British Ladies’ Football Club’, the club is the first of its kind not only in England, but in the whole world.

Meanwhile, on an individual level; the Ballon D’or Feminine was awarded for the first time in 2018. This trophy is the equivalent of the Ballon D’or.

Not only is this painfully late, but during the award ceremony the host asked the winner to ‘twerk’ after handing over the trophy… Yeah… Yikes!

The Biggest And The Best In Women’s Soccer 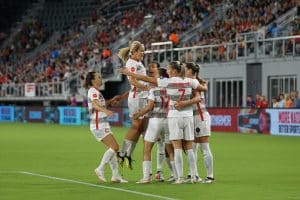 Ada Hegerberg was the winner of the first Ballon D’or awarded in women’s soccer. She is a Norwegian soccer player, who is currently playing for the French team of Olympique Lyonnais.

Her national team is one of the few countries to have ever won the FIFA Women’s World Cup. They won the award in 1995, which also was the second tournament of this nature.

The most dominant force in international women’s soccer however is non other than our beloved National Women’s Soccer Team.

It is very interesting how although the US isn’t usually thought to be one of the countries that love soccer the most, yet they are such a dominant powerhouse within it!

Speaking of other countries, in Europe and on a club level, the aforementioned Olympique Lyon is arguably the most dominant women’s soccer club.

While an official Women’s UEFA Champions League has only been established as of this year. The form of this competition that existed prior has been won 7 times by Lyon’s women’s team.

While the French can be really proud of their achievement. As a country, it is Germany who has the most clubs who’ve won this trophy.

Meanwhile, on an individual level the Ballon D’or Feminine has been awarded only two times so far. With the winners being Ada Hegerberg and, our own, Megan Rapione.

Women’s soccer has definitely made a lot of progress in the last few years, but it is not year where is should be. There is a lot that women’s soccer can become.

There is undoubtedly immense potential in women’s soccer, and with the right promotion and marketing, FIFA can turn this into a gigantic industry.