Shooting in soccer is one of the most essential parts of the game. At the end of the day, kicking the ball around is what soccer is to the untrained eye.

There is more to shooting in soccer than just necessity. It is one of the most exciting and most adored parts of the beautiful game.

For example, in an interview with LiveScore, Cristiano Roanldo was asked what is his favorite goal that he has ever scored. He replied that it was the goal he scored against Juventus.

The jaw dropping bicycle kick that left the world in shock! Is one of the most memorable goals ever and we can totally see why it is Cristiano’s favorite.

But, if we had to pick the craziest goal that Cristiano has ever scored we would choose the goal he scored back in 2009 against Porto.

If you’ve seen it, you already know what that goal was like. After passing the middle of the pitch, Cristiano runs for a brief distance, and from 39 Yards away, he unleashes a nuke of a shot!

The soccer ball went in, at the top left corner! It is hard to kick a ball that far for the average person, but to kick it past a professional goalkeeper is something else.

That is the beauty of shooting in soccer! There is something that can’t quite be replicated in any other way!

It happens rarely, but when it does. When someone uses shooting in soccer to score a goal from many yards away, it is a spectacle that makes soccer as special as it is.

What Is Shooting In Soccer? 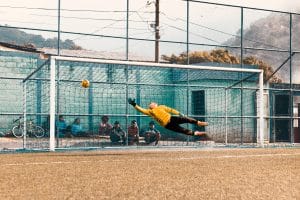 So is that all there is to shooting in soccer? Is shooting something that soccer players only use to score goals?

Most definitions of what shooting in soccer is, forget to mention the latter part of that definition. Shooting is more than just scoring, it can also be used as a defensive tool.

As we already said, shooting is a very essential part of soccer, so it comes off as no surprise that there are many different ways of counting shots, and presenting statistics about it.

Shots on target simply refers to the amount of shots that a team or player has taken and have gone within the goal post. If the shot goes beyond the borders of the goal, it doesn’t count as a shot on target.

First Thing To Know About Shooting In Soccer 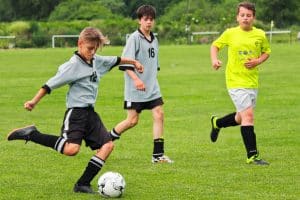 One of the biggest misconceptions that people who first try soccer, or are only recently familiarizing themselves with it have is the idea that shooting in soccer is all about power.

While power is definitely important it is not the main factor that drives shooting in soccer. Sometimes, power can actually be something you want to avoid.

The main thing that you need to master if you want to have the perfect shooting ability in soccer is shooting technique.

Now this is a very wide topic! There are so many different techniques and styles of shooting in soccer that going over all of them can be quite the tough hill to climb.

For example, we mentioned that sometimes too much power can be counterproductive. This is true if you are trying to curve a shot!

Best way to understand this is to watch Messi score. The way the ball curves, it feels as if it is going in slow motion, yet goalkeepers seldom are able to stop these shots.

It becomes even more complicated when we think about the famous way that Roberto Carols used to do curve shots, with huge amounts of power.

Now, this is very complicated! Don’t let it scare you. We will, for now, focus only on the most basic ideas of shooting in soccer.

First and foremost you need to realize that where you kick the ball will significantly impact how the ball moves. The lower the kick, the higher the ball will go, and vice-versa.

The part of your foot that makes contact is also hugely important on the shot and how the ball behaves once you kick it.

The best tip for beginners is to always shoot the soccer ball with the front of your foot! Try going for the middle of the ball!

This way you can put the most amount of power behind your shot, while not sending the ball into space.

Second Thing To Know About Shooting In Soccer 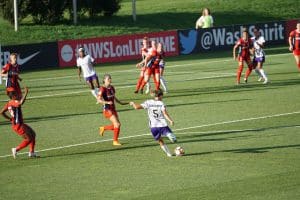 You can get better at it! This sort of ties in with what we already spoke about earlier but, when it comes to shooting in soccer, you can always improve.

The best way to get better at shooting in soccer is to go for private soccer lessons. In having a helping hand that guides you, your shooting will become awesome in a very short time.

I have already spoken on how impactful shooting has been for my career. It is true that shooting in soccer is a great way for players to put themselves on the map.

It can make the difference between who gets picked for the starting eleven and who ends up sitting on the bench.

Knowing this, sometimes soccer players get frustrated with the idea that they are simply bad at shooting and more often than not this frustration prevents them from getting better.

I wish I had the opportunity to get private lessons back in the day. It would had helped a lot, and would have gotten me to a point where I wanted to be much quicker.

At the end of the day, simply understanding that you can always improve your shooting can help a lot with young players and beginners of soccer.

You won’t be amazing with your first try. You won’t be able to score goals that are more akin to nuclear missiles than soccer shots.

However, with enough determination, the right help and mindset you too can get there. Probably, much sooner than you think!