The biggest downfall in soccer history might be unraveling as we speak. The 2021/2022 soccer season has been full of surprises.

Starting from the antagonizing, pure edge of the seat, nail chewing transfer market that saw Lionel Messi leave Barcelona, Cristiano Ronaldo nearly joining Manchester City, only to end up returning to United, and much more.

This season keeps on surprising fans, to a point where it is hard to keep up with what has been going on in every major league.

So much so that a lot of people haven’t even noticed how some big clubs are performing so far this season. While the main focus has been shifted towards England mostly, due to the competitive nature of the Premier League, there is something else going on.

If you had to guess on top of your head, without looking, who is currently top of the Spanish League. Who would you guess?

The obvious answer would be one of the top three teams: Barcelona, Real Madrid and Atletico Madrid. That’s the instinctual answer most people give.

And you’d be right. Real Madrid, as of October 11th 2021, is leading the league with 17 points, followed by Atletico Madrid who have the same amount of points.

It might come off as a surprise to you that the third place, Sporting Betis has also 17 points. What will shock you though is Barcelona’s current position.

As of publishing this post, Barcelona are at the 9th position in the La Liga race. Not only that but they are coming off a devastating 2-0 loss against Atletico Madrid.

The second goal of the match was scored by Luis Suarez, the bombastic forward, who was a Barcelona player just one season ago.

If you recall, Luis Suarez was the only Barcelona player to score against Bayern Munich last season. In what was, arguably, the most humiliating defeat in the history of the Champions League.

This brings us to where it all started, where the biggest downfall in soccer history began. Barcelona was never the same after that Match. 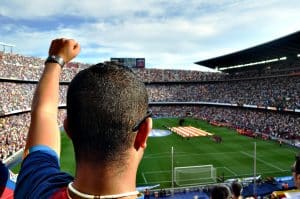 The 2019-2020 season has been a very problematic one for obvious reasons. Once football returned, everyone was ready to be entertained yet again.

One of the most anticipated matches had been the bout between Bayern Munich and Barcelona, which was to take place on August 14th.

The Barcelona fans and tema had been going through some turmoil to say the least. There was a bit of displeasure with where the team management was going and there was a visible desire for a new coach.

However, everything would become great and fine once Barcelona defeated Bayern Munich. There was a sentimental value on this match, especially for the fans.

It was time that Barcelona, led by Messi, reminded the world that they are a power to be reckoned with and that they can win the Champions League.

And then the Germans started raining down hell and furie so vicious, it seemed like Barcelona just got caught in a tornado.

To say that Bayern won easily, is clearly an underestimation. Bayern Munich cut through Barcelona like a hot chainsaw through butter.

It was right after this match that things started to go downhill for Barcelona. Not only were the fans totally heartbroken, but Messi had shown clear intent to leave the club.

This was actually terrifying for most fans. Not only did they endure a humiliating defeat, but now their most beloved star is willing to leave.

We believe this truly makes what is happening to Barcelona the biggest downfall in soccer history. 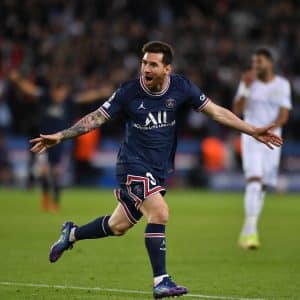 Lionel Messi’s move to PSG, perfectly summarizes the biggest downfall in soccer history. The most loyal player leaving the club, sort of poetically felt like a captain abandoning a sinking ship.

The transfer of Messi created a clear gap that needed filling as soon as possible. Barcelona would go on to have a decent transfer window.

They would bring in quite a few interesting prospects and well established super starts too. Standing out mostly would be Sergio Aguero.

Emerson Royal, was one prospect that cost Barcelona 14 million euros (16.1 million dollars). They were also able to secure the services of Memphis Depay and Eric Garcia.

As good as that sounds, none of those players could replace Messi. To make matters worse they also lost Antoine Greizmann.

The latter didn’t have an astonishing time at Barcelona, but it is an unquestionable fact that Greizmann is a world class player.

The morale was pretty low among fans, club officials and players alike. It seemed that this would be the beginning of the end.

Notice how we only mentioned the cost of Emerson Royal, and no other cost was mentioned for all the other transfered players.

That is because they all were brought in for free. Under any other circumstance that would be an amazing business strategy, yet this wasn’t it.

Barcelona, during this time, was facing the biggest financial turmoil they ever had as a club. They didn’t have a dime to spend, and it was sheer luck that Aguero’s contract with Manchester City ended precisely when it did.

Even worse, is the heartbreaking story of Emerson, who was sold immediately after Barcelona bought him. He felt betrayed, and we can’t blame him at all.

All of this brings us to the last point, and to what is the main cause of the biggest downfall in soccer history – financial turmoil.

Poor Financial Management Cause The Biggest Downfall In Soccer History 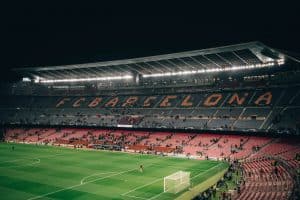 We did say that Messi’s departure marked the biggest downfall in soccer history perfectly, but the reason wasn’t as clear.

You see, it was similar to a captain abandoning ship, but only if said captain was forced off the ship. Messi’s last press conference with Barcelona is one of the most emotional press conferences in all of soccer history.

As of right now, Barcelona finds itself in a mindblowing debt of 1 billion british Pounds. As if this wasn’t bad enough, the bad performances that the team has been having, are also taking a huge toll on the club.

Certain changes in the regulation of the Spanish League forced Barcelona to face the biggest downfall in soccer history.

They were not allowed to spend money they don’t have anymore. Without getting too much into the financial details, it is worth saying that Pique is currently not getting paid by his club.

A prolonged series of very, very poor management and transfer politics that were messy, unclear and void of any direction brought Barcelona to its knees.

As of today they are facing the greatest downfall in soccer history and if they aren’t able to do something about this soon, they might end up in a position from which they can’t recover.

Seeing a club lose its starts, go through bad management and so on, is something that Manchester United fans can relate, as we discovered in our earlier post from last week.

However, the situation with Barcelona seems to be far worse. People aren’t wondering if they are bad, they are literally facing the biggest downfall in soccer history.

Fans and soccer enthusiasts in general are left wondering what is next for Barcelona. It is hard to imagine them getting out of this situation soon though.