Everything You Need To Know About Soccer Leagues For Kids

Soccer leagues for kids are popping up left and right all over the US. This is mostly due to the increasing demand and admiration for soccer.

As a nation, we are truly different in this regard from the rest of the world. While soccer is the number one sport worldwide, here in the US, that isn’t the case.

The trends show that soccer is growing constantly in the US, and it can be said that eventually soccer will catch up in popularity with the major three; baseball, football and basketball.

Younger generations seem to particularly be interested in soccer more than the generations before them.

More and more kids are choosing soccer as their favorite sport, and we see more and more parents trying to convince their children to take soccer lessons.

These two facts, combined together can create a slight problem. This problem affects mostly parents looking to get their children to start with soccer lessons.

Due to soccer not being as popular, there are a lot of unknowns in the public’s eye. For example, today’s topic; soccer leagues for kids, is one that a lot of parents aren’t fully informed about.

What Are Soccer Leagues For Kids? 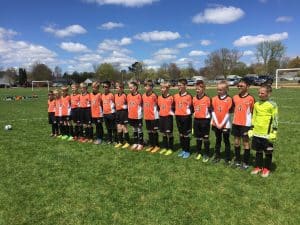 Soccer leagues for kids are competitive soccer leagues that last throughout a season, with different teams participating and playing against each other.

The goal that every team in soccer leagues for kids have is to accumulate as many points as they can and to be top of the table by the end of the season.

Majority of soccer leagues for kids follow a system similar to professional soccer leagues, where a specific number of teams play against each other two times per season. Once home, and once away.

A victory nets the team 3 points, a draw nets you 1 and a loss leaves the team pointless. The teams are ranked based on the number of points they can gather, game after game.

Soccer leagues for kids are of course a bit less competitive and are designed to create a fun and enjoyable experience for everyone involved, mostly the kids.

They represent a great starting point for kids who aspire to play in the major soccer leagues one day. Be it here or even in Europe.

Type Of Soccer Leagues For Kids 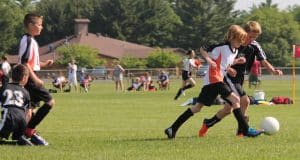 Soccer leagues for kids are mostly regional, and they can vary a lot on how they operate. As a rule we mentioned point accumulations and rankings, not every league has this though.

If you look around you will see that a lot of leagues try to go for a more kid-friendly approach. Where the competitive side isn’t paid too much attention.

At times, certain leagues don’t even count points at all. Teams simply participate with each other, and at the end of the match, it’s all over.

This can be a bit of a turn off for some parents, and that is okay. Part of why it is so hard to define soccer leagues for kids is because there are so many of them, and they vary quite a lot.

If you want to put your kid in a league that has a stronger emphasis on competition, you will most likely find a league in your area that does precisely that!

There are also soccer leagues for kids that aren’t spread out through an entire season. They most resemble a tournament, where losing means getting eliminated.

These are rarer and can be harder to come by. They also mostly happen for older age groups, as the elimination factor can drive the competition quite high.

How Do I Register My Child In Soccer Leagues For Kids 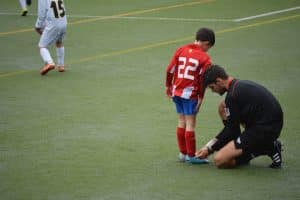 If the idea of soccer sounds interesting to you, and if you are looking to get your child started, then you might be wondering how do I register them at a soccer league?

The short answer here is that you don’t. If you want your child to train soccer simply for the love of the game, or for the health benefits of it, you are better opting for soccer lessons.

In order for someone to register at a soccer league for kids, you will need to register a team. You will also need to be the coach/trainer of said team.

If you want your kids to participate in this, then you should look into local clubs that are registered in such a league.

Although this might sound like too much work, trust us when we say that it isn’t. You can simply ask the place you’re registering on whether they are registered in such a competition.

Soccer leagues for kids however, aren’t for everyone. We don’t mean to be facetious here, the truth of the matter is that these leagues can be a real hassle and a commitment.

You will have to divide more time to take your kids to and from their matches; in which they face a greater risk of injury than they do in training.

But at the end of the day, if you are considering soccer for your kids, definitely consider soccer leagues for kids. Soccer is dubbed “the beautiful game” for a reason.

Start searching for leagues around you, and once you find some, look for the teams listed in those leagues. You will have to register with one of them in order to participate.