Who Is The Best Soccer Player In The World?

Who is the best soccer player in the world, is a question that soccer fans and admirers have been asking themselves for as long as there has been soccer.

To find out who is the best soccer player in the world is a task that many have taken upon themselves and have failed to come to concrete conclusions.

The complexity of finding out who is the best soccer player in the world is one thing, but this conversation also tends to be fiercely charged.

Most of the time, the conversation boils down to who you support and the answer is always going to be based on one’s emotional attachment to said player.

Therefore asking who is the best soccer player in the world, not only leads to conversations that tend to get emotional, and due to that, it pretty much leads nowhere due to the fact that feelings don’t care about facts.

With all this in mind, would it even be possible to define who is the best soccer player in the world in a subjective manner?

You could try, but you would run into some issues. For example: what metrics are you using to weigh the significance of one player? What are your criteria of success?

A great starting point could be the Ballon D’or. The ultimate and most prestigious trophy an individual soccer player can win.

Ballon D’or 2021 hasn’t been awarded yet, so for the moment being, we can’t say with absolute certainty that one or the other player is the best in the world.

The last person to win the Ballon D’or was Lionel Messi. He won  it back in 2019. Lionel Messi is also the player to have won this trophy the most out of all other players.

So does the conversation end there? Unfortunately, not so much. You see individual achievements are one thing, but soccer is, at the end of the day, a team sport.

To balance things out, you could say that the player with the most group trophies and individual records is probably the best.

In that case, Dani Alves is the player with the most trophies ever won, with an astonishing total of 39. Messi, isn’t far behind though having one 34 trophies and realistically still counting.

So maybe even this path leads to Lionel Messi also. Think about it, although he might not be (for the moment) the player with the most trophies, he’s pretty close to the first place, and individually he’s clearly on top.

Now, some of you reading this might already be very angry at us, because we haven’t mentioned one Crsitiano Ronaldo.

The argument about who is the best soccer player in the world, at the moment, always boils down to the rivalry between Lionel Messi and Cristiano Ronaldo.

While Messi fans list some of the above mentioned facts as the reasons why Messi si the best, Cristiano Ronaldo fans have a different story to tell.

Out of the get go, they immediately throw out facts about the astonishing amount of goals that Cristiano Ronaldo has scored.

For example, Ronaldo is the best international goal scorer in the history of soccer. Having scored, as of the writing of this post, 115 goals. 35 more than Messi’s 80.

Among other things when hearing from Ronaldo fans, you will hear about the extraordinary feats that he has accomplished in the UEFA Champions League.

He is known as Mr. Champions League after all. He is the all time best goal scorer in this competition, while also holding the record for the longest streak of goals scored in every game, with 11 consecutive Champions League games.

So which one is the right way to go about this? Well, there isn’t actually. You see, the conversation has spiraled right back to where it all began.

Even though we are trying to measure things subjectively one can make the case for either of these two player, based on the statistics that they chose to metnion.

Is it all doom and gloom then, we can’t never know who is the best soccer player in the world? Well, yes and no.

The thing is the answer will always be based on the one who’s answering it. Even if you try to answer it sincerely, you still need to pick a side and choose what is more impressive to you.

There is one more aspect of this question that we can try and work with. Maybe, we are falling for recency bias, and are leaving out some other, older great players.

Who Is The Best Soccer Player In The World Of All Times? 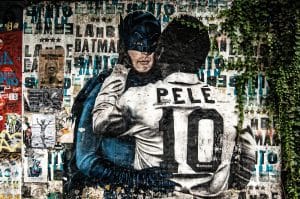 Okay, this should give us some more working space. Trying to find out who is the best player in the world, not just today but in the entire history of soccer.

Most people would go to the legendary Diego Armando Maradona, and point out that he is the greatest soccer player of all time.

And although that has merit and we would never try to downplay how amazingly fantastic Maradona was, there is an issue with this, a huge one actually.

This issue is the same when people argue that the Brazil legend Pele, is the best soccer player of all time.

When we made our picks for the greatest soccer players to ever live, we ran into this very issue. The fact of the matter is, the competition faced by earlier players is nowhere near as tough as the one faced by modern day players.

Sports as a whole have been evolving drastically for the past few years and decades. We are now experiencing the most advanced, most physically capable generation of athletes.

The same, of course, applies to soccer players. We have made a science out of sports, and that has allowed us to take our capabilities to the next level, and arguably to the final level of physical performance.

Not only that but all the other great players have had a few seasons of domination at best, meanwhile Messi and Ronaldo have dominated for more than a decade now.

The first Ballon D’or to go to either Messi or Ronaldo was the 2008 Ballon D’or. Ever since then, the soccer world has been in a constant cat and mouse game between the two.

They have had the greatest longevity of domination while playing against the toughest, most well-trained and well prepared competition there is.

Picking either one as your answer is quite frankly not wrong, and you’d be correct saying whichever one of these two names.

We believe that picking only one between these two players is something that we do based on emotions and personal preferences.

Maybe that’s sort of a good thing if you think about it… You get to pick who is the best soccer player in the world for you, and most likely your answer is objectively right!